The Corona Hotel or “Corona Grossa” (“great crown”), as it was called before the 18th century, has very ancient roots. The little inn was provided[...] To give the maximal importance to an old town center and to be able to take advantage of the own cultural patrimony the Cultural Village has risen in Domodossola, which has permitted , thanks to important restoration works, the medieval center’s rebirth through the reevaluation of the historical palaces, squares, colonnades and with rocky paved roads. 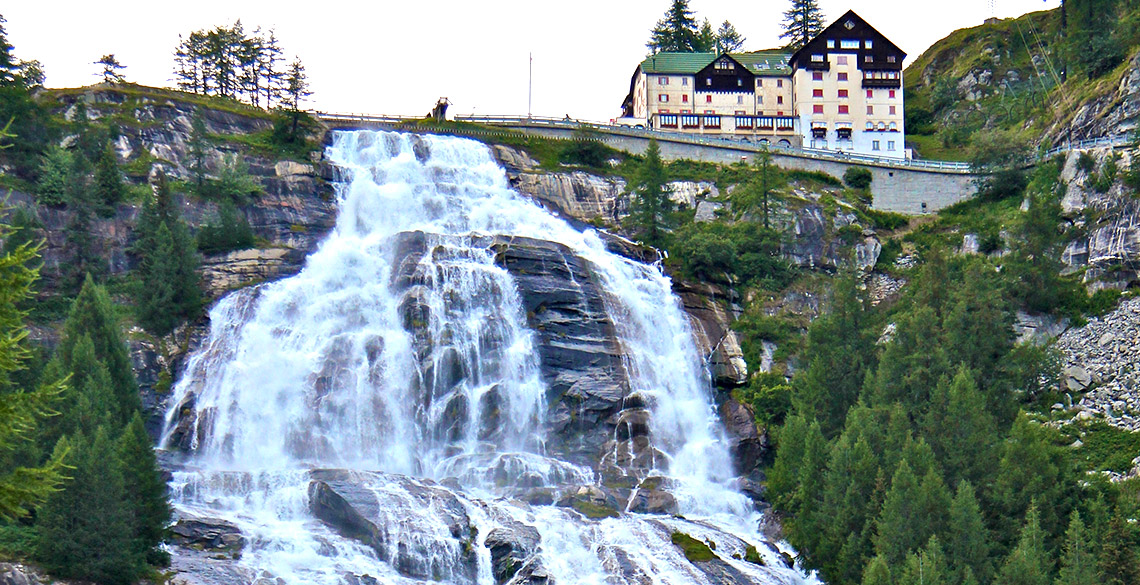 The Formazza Valley is one of the valleys of the district of the Ossola Valley, the river Toce flows through it springing at one end of the valley and forming a spectacular waterfall: the second in Europe with a height of 143 meters.
The valley has an extremely various and rich vegetation and fauna and is crossed by many paths which permit splendid excursions to visit the lakes, snowfields and mountain peaks. In the winter season the Formazza Valley offers slopes for downhill and cross-country skiing for all standards in addition to slopes for fans of backcountry skiing. 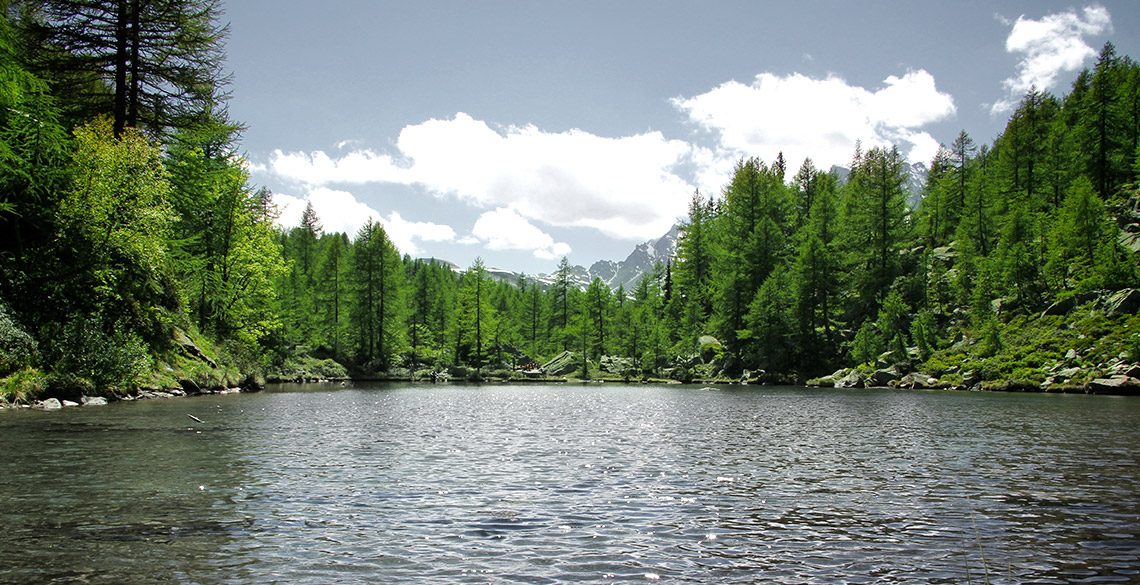 The Veglia and Devero Alps form together an alpine natural park that offers a landscape which is  at the same time soft and severe because of its grasslands at  great height side by side with the great wind-blown mountains. Veglia and Devero form an alpine area of great value and naturalistic interest thanks to the variety of species and habitats that can be found there. 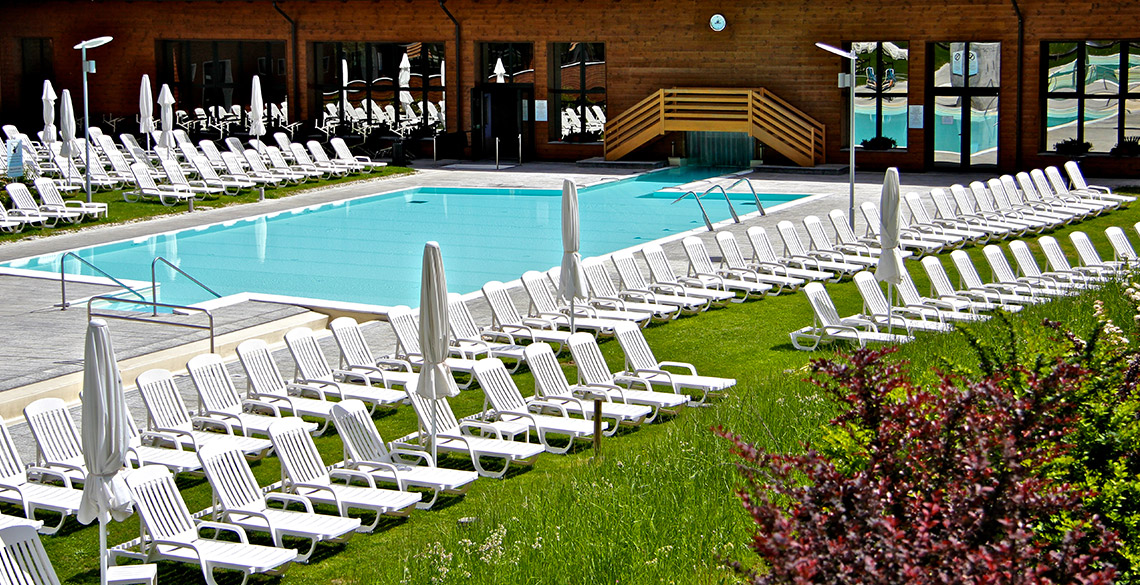 The spa center Premia Thermal Baths lies in the Antigorio Valley, in the middle of the Ossola Valley’s mountains and natural parks, offering to visitors the naturally warm water’s beneficial effect. The structure has indoor and outdoor thermal water pools. Macugnaga is located at the feet of the famous western side of the Monte Rosa, which is the Alps’ highest mountain and the only one of Himalaya-like size, and counts even two ski areas: Macugnaga Belvedere and Macugnaga Monte Moro.
For cross-country skiing fans there is a track with parts of different difficulty. The location offers in summertime a marvelous alpine natural area. In Macugnaga it is still possible to feel the Walser spirit, an helvetic population from which the first settlements in the valley derive, with its folkway, typical dishes and the Walser Museum. 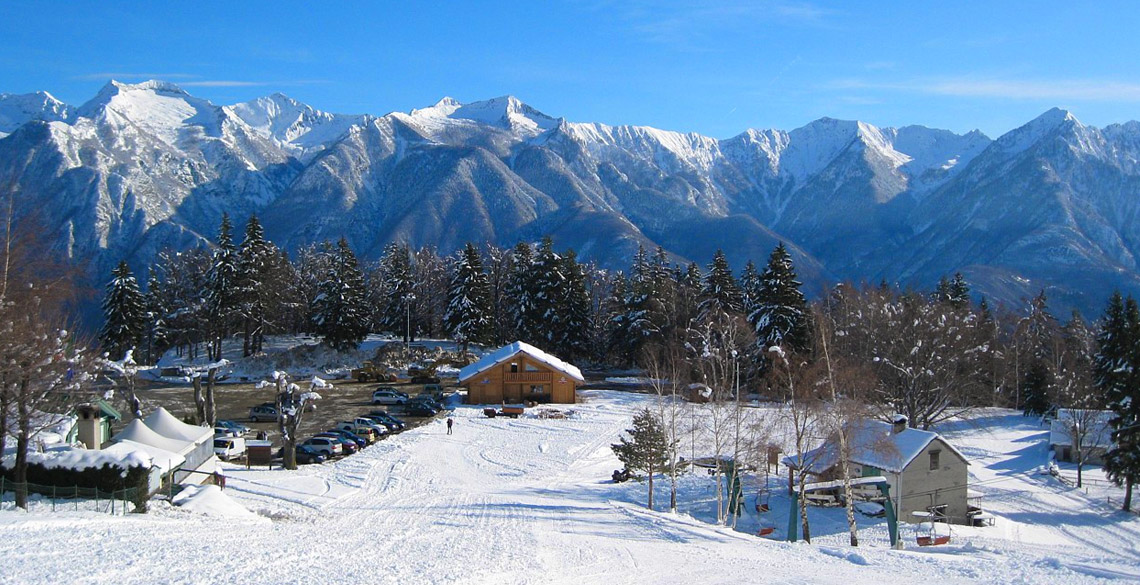 Only 15 minutes away from Domodossola lies Domobianca, a little paradise for ski and snowboard fans because of its 20 km of tracks that go from the Lusentino Alp to the Moncucco, forming an altitude gap of 1000 meters. Snow is guaranteed on the slopes from December to April.
In Sandomenico both fans of classical disciplines and the ones that desire to put to use the well looked after snow park with half pipe, rails and jumps will surely have fun. 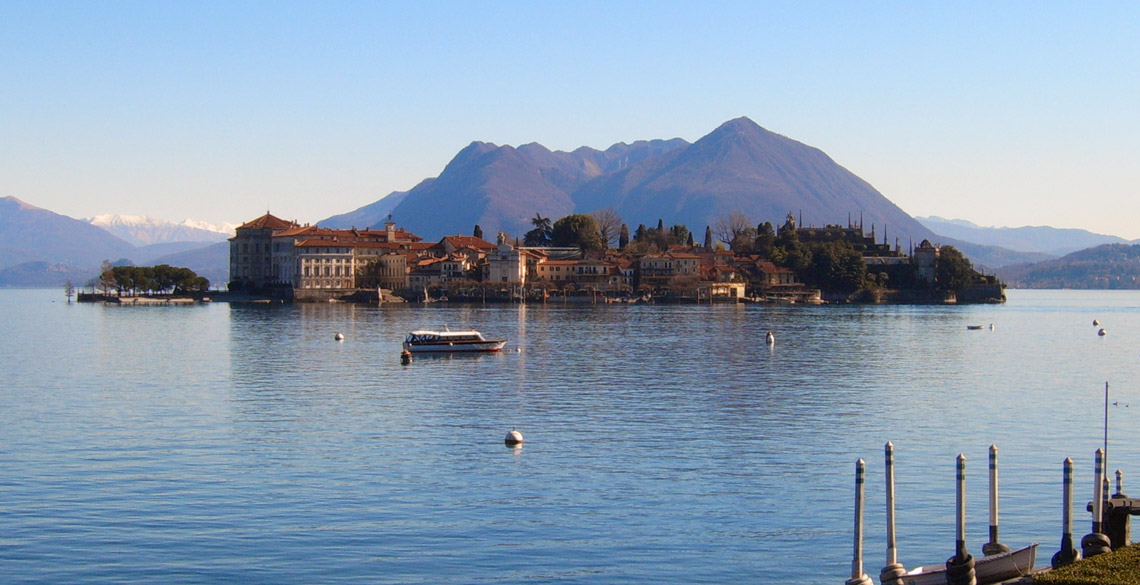 One of the points of interest is without any doubt the Lake Maggiore, which goes for 66 km from the swiss (Ascona and Locarno) to the italian territory (crossing the provinces Verbania, Novara and Varese). The Lake Maggiore is full of islands, as the archipelago of the Borromean Islands and, in front of Cannero, the three emerged cliffs known as the Castelli di Cannero. On the whole Lake Maggiore territory there are a lot of places of interest as castles, villas, gardens and museums. Located west from the Lake Maggiore, the Lake Orta is a little naturalistic treasure, whose pearl is represented by Orta San Giulio, a little medieval village with narrow and suggestive alleys. It is possible to ship from the main square to reach the San Giulio island, the lake’s symbol, in whose center lies the ancient Seminary, which is nowadays an abbey inhabited by a Benedictine nun community. 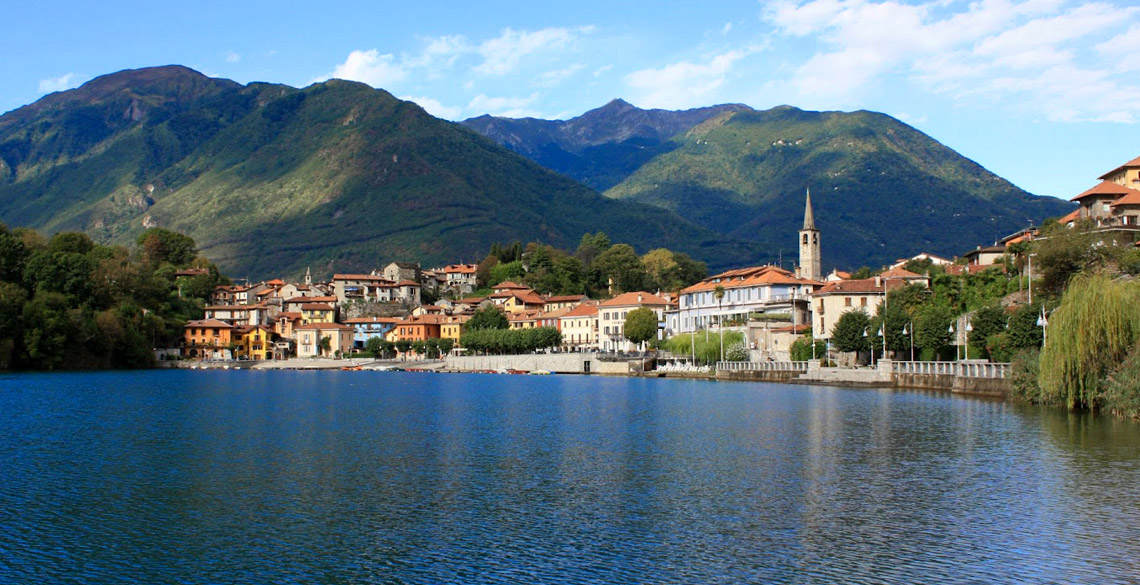 It is considered the Ossolan Valley’s southern entrance, and it is a little lake on which the village Mergozzo, with its characteristic constructions in ossolan rock, looks.
The Mergozzo Lake is considered a little paradise for water sport fans because of its clear water. 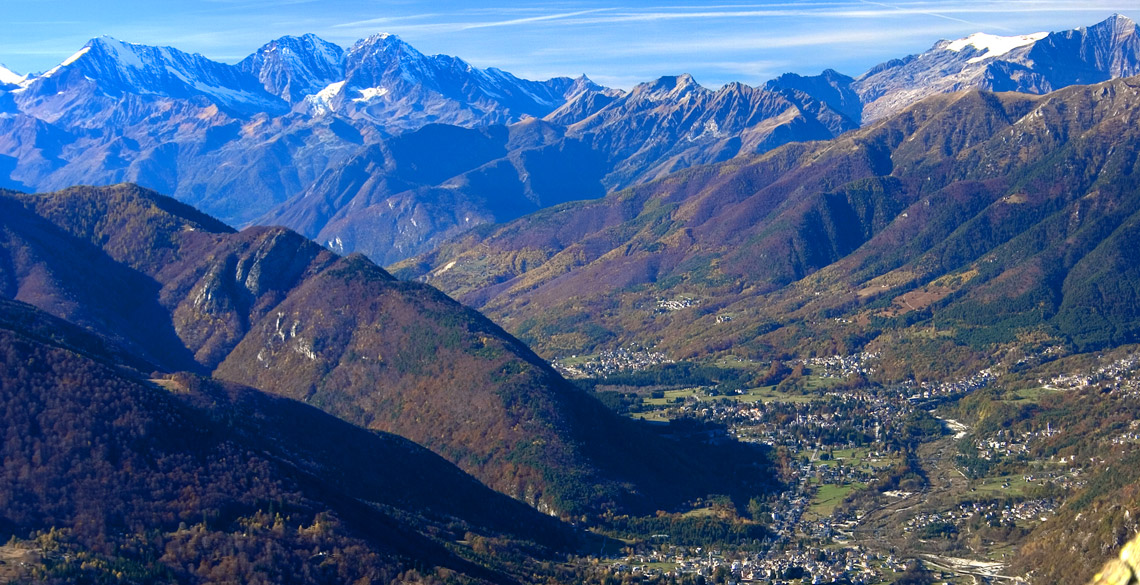 The Vigezzo Valley, which is formed by a vast plateau with forests, grassland and alpine lakes, is one of the seven valleys that branch off the Ossola Valley, connecting Italy with Switzerland. It is also known as the “Painters’ Valley” because of an ancient tradition of local painters who have succeeded in showing to the world the place’s beauty.
The valley offers 15 km of tracks for cross-country skiing during wintertime, in addition to ski-lift machineries for downhill skiing lovers. During summertime it’s possible to make beautiful excursions by foot or on horseback surrounded by the green of an uncontaminated nature. 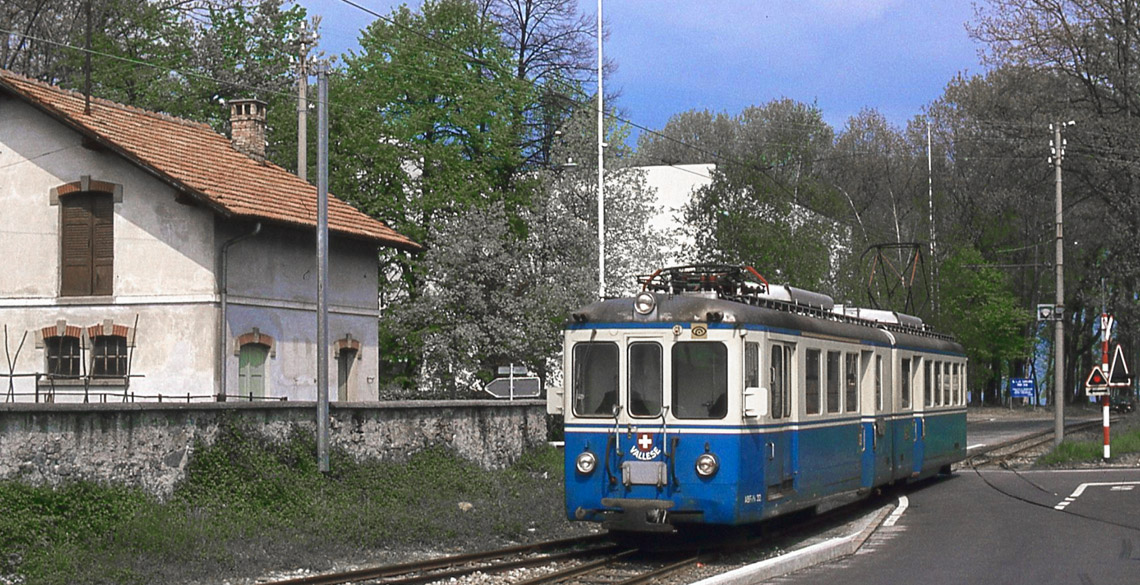 The Centovalli Railway is a railway connecting Domodossola with Locarno that was built at the beginning of the 20th century. Known also as “Centovallina” or “Vigezzina”, it is the alpine railway par excellence and represents a big touristic attraction because of the beauty of the landscapes it crosses, giving the traveller the opportunity to admire breathtaking natural sights. 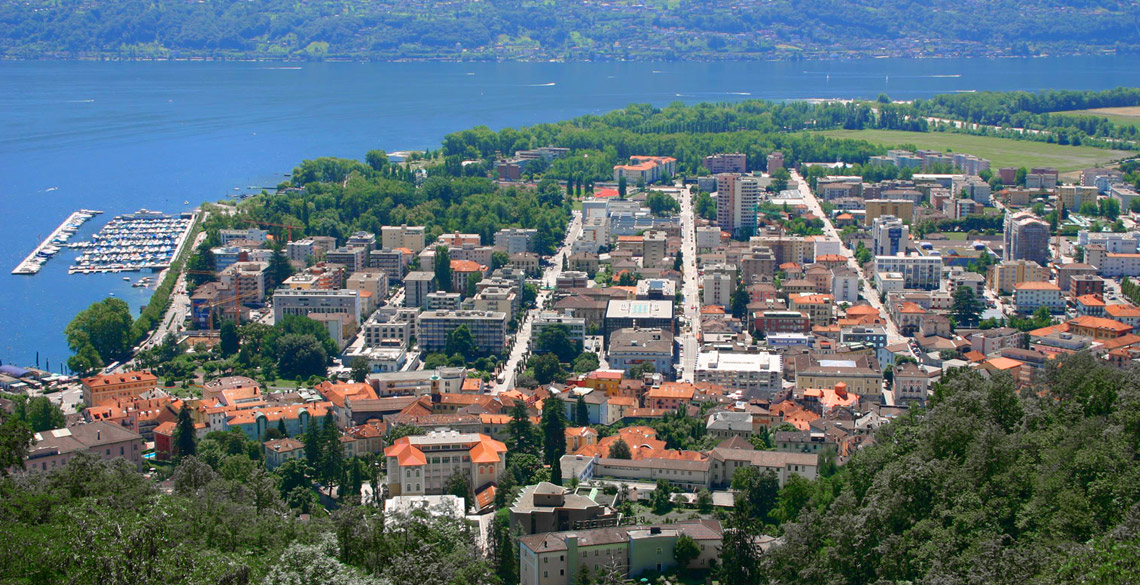 Very near Switzerland represents an important touristic attraction: the canton Ticino is a little paradise for lovers of outdoor activities because of the numerous opportunities for excursions during the whole year. Furthermore, there is  one of the longest seasons of music and film festivals, shows and open-air events of international significance in the Ticino every year. 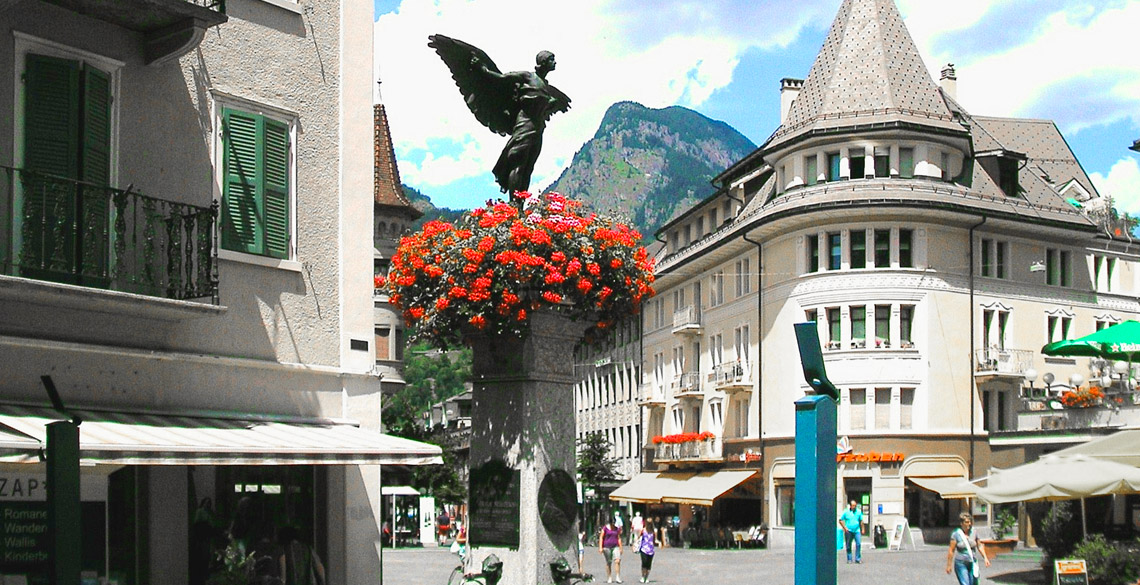 The city Brig lies at the feet of the Simplon Pass in the Upper Valais. It is an important international communication junction and starting point for excursions and important skiing areas as Zermatt and Saas Fee. 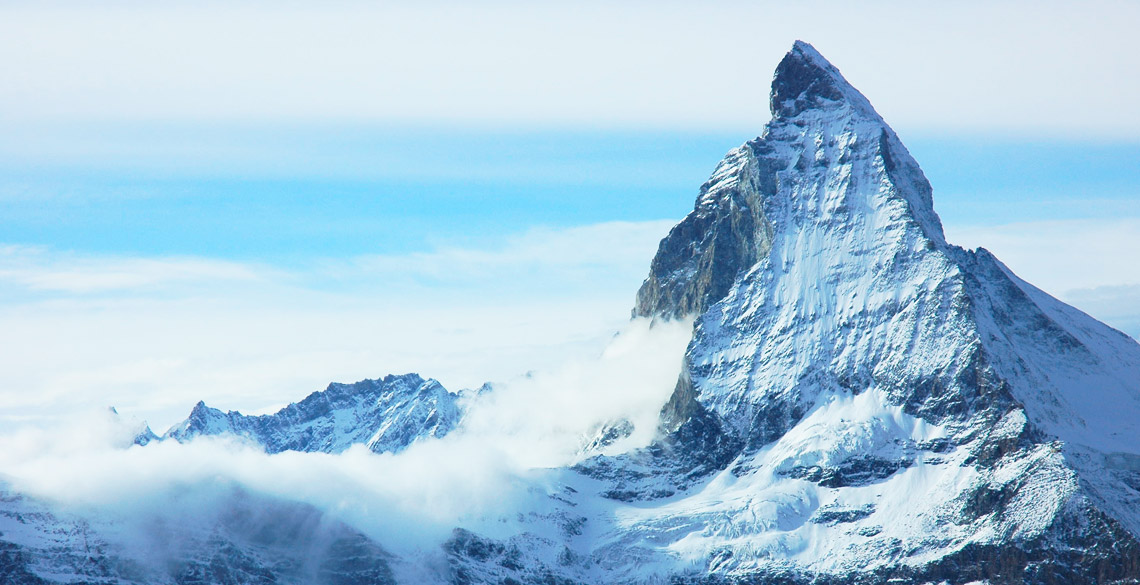 Homeland of backcountry skiing, with its 183 km of tracks Zermatt is a locality in the canton Valais overlooked by the Matterhorn (Italian: Monte Cervino), Switzerland’s emblematic mountain. The area is able to offer an untouched and wild nature with unique flora and fauna, besides being a paradise for backcountry skiing and winter sports lovers.
Thanks to the Matterhorn Ski Paradise, the ski district which connects Zermatt to Valtournenche and Cervinia, it is possible to ski during the whole year.